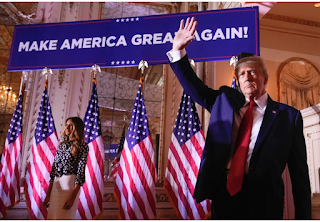 To the surprise of absolutely no observer of American politics, Donald Trump today announced that he will be running for the Presidency again in 2024. Well may it be asked, what is motivating him. Ego? Vindication? Settling scores? To represent the hopes and aspirations of his supporter base? A combination of some or all of these things? Here we go again. 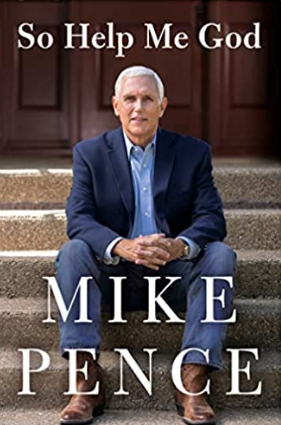 I am looking forward to reading, or to be more precise, listening to on Audible, So Help Me God, the autobiography of former United States Vice President, Mike Pence. Pence and President Trump famously fell out when Pence did not overturn the results of the 2020 Presidential election, which to this day, Trump stubbornly asserts was stolen from him.

It is widely speculated that Pence is positioning himself to run for the Presidency in 2024. The publisher's blurb hints at this, stating that Pence is open to accepting "the next challenge." These types of books are usually part of a candidates' campaign strategy. The BBC thinks it very likely that he will be one of the contenders, as will Trump. If so, former allies will become rivals. Trump will mercilessly attack him, just as he did to his opponents in 2016, which will add an interesting dynamic to the primary and caucus season.

How did this happen? 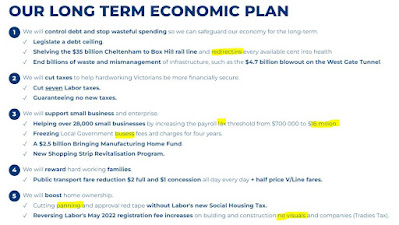 How did this get out? Was it leaked, or published accidentally. As bad as the current Victorian government is, the Liberal Opposition cannot credibly present themselves as an alternative government if they release such sloppy policy documents as this. 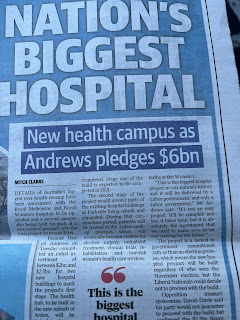 Daniel Andrews, the current Premier of the Australian state of Victoria has a very high opinion of himself, as his government's grandiose election promises partially attest, such as building the biggest hospital in Australia, as reported in the pictured newspaper article, but not even he is capable of time travel, which is the only conceivable way to make retrospective election promises.
Posted by Ross at 4:48 pm No comments:

In the tradition of Stuart Littlemore

The American state of Florida can't get a break. An eagle-eyed American friend brought this to my attention.
Posted by Ross at 7:53 pm No comments:

Freedom must be preserved.

An address by His Excellency, General the Honourable David Hurley, AC, DSC, FTSE, Governor General of Australia, to mark the passing of Queen Elizabeth II.
Posted by Ross at 3:18 pm No comments:

A note for my reader

Ross
Melbourne, Victoria, Australia
I'm a former librarian from Melbourne, Victoria, and also do freelance proof reading on the side. I hold a Honours degree in Humanities, majoring in history, a Graduate Certificate in Professional Writing and Editing (which I've never used, at least not in the sense of being a published author in my own right), a Graduate Diploma in Information Management, a Master's degree in Theology, and last of all, a Certificate IV in Training and Assessment. Good movies, good books, good food and good company are my pleasures in life, such as they are. Comments are moderated, but usually accepted.